FourGood Comedians is back to kick off our 2020 with a blistering night of stand up comedy. This year also marks our ten year anniversary and makes us the longest running independent comedy night in Wales. (We think but are happy to be told otherwise?) 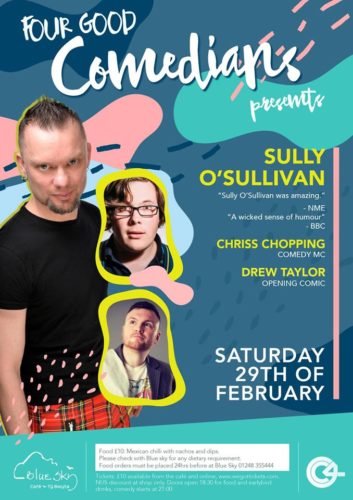 To kick start this year we have a 4GC favourite, Sully O’Sullivan headlining. Sully is joined by Drew Pritchard, Rob Mitchell, and MC, Chris Chopping.

Admission as usual is £10 or £9 NUS. Tickets can be purchased online or at the Blue Sky Cafe.

Doors open at 6pm for EARLYBIRD drinks and food, show starts at 9pm.

We hope you can join us to start our ten year anniversary run of comedy. It’s been a great ten years so far with acts from all over the world performing for us. So here’s to another ten years of bringing the best of the stand up comedy circuit to Bangor.

Thank you to all who have supported us over the past ten years. We hope to see you on February 29th.